Best Actress Nomination for “The Gift”! 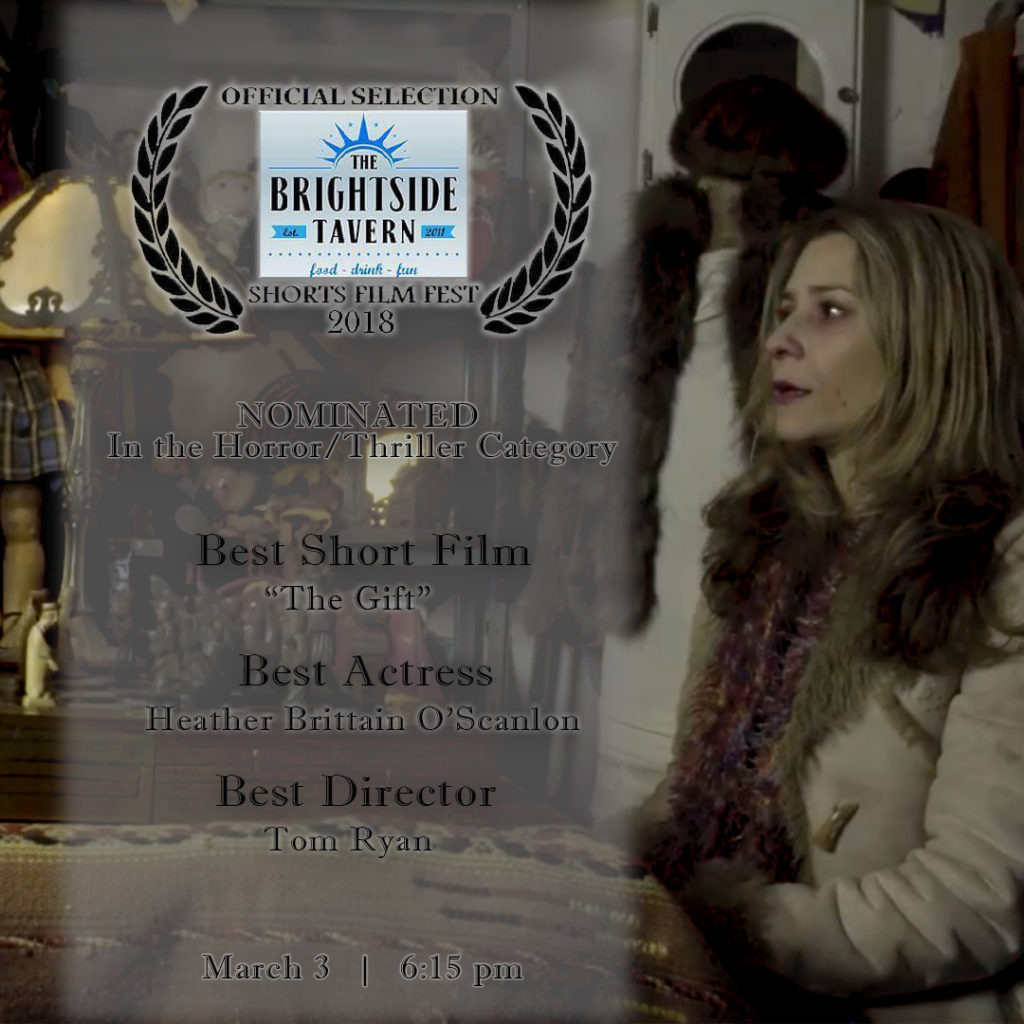 I am so honored to be nominated for Best Actress at the The Brightside Tavern Shorts Fest Film Series for Theatre of Terror’s “The Gift” – along with our director Tom Ryan, for Best Director – and a Best Horror/Thriller nom for the film itself!

“The Gift” screens March 3rd at 6:15 PM at the Brightside Tavern in Jersey City.

FIVE of My Films Selected for the Garden State Film Festival!

Annnnd the good news keeps rolling in this week!

I am so very honored to have FIVE (OMG – 5!!!) of my films selected to screen at my very favorite film festival – the Garden State Film Festival – in Asbury Park, NJ this March 22 – 25!!! I’ll provide more details on each of the films and screening information as we get closer, but in the meantime… here’s a quick summary of each!

“The Waiting Room”– directed by Debra Debbie Markowitz and starring Jennifer Jiles, Ciarán Sheehan, Justin Wilson, Noelle Diane and myself. This film has won and been nominated for several awards since starting its festival run last spring and I’m so glad to be bringing it to GSFF!

“Therapy, Bro”– an Open Iris Entertainment film, directed by John Hedlund, starring Francesco Nuzzi, Wally Marzano-Lesnevich, Garry Pastore and… yours truly! This will be the WORLD PREMIERE and this Jersey girl couldn’t be more excited to be having it at GSFF!!!

“As It Seems”– written, directed and produced by Nancy Menagh, starring myself, Drew Moore, Cole Johnston and Jo Bellomo. “As It Seems” has either won or been nominated for an award at every festival it has screened at thus far – and the GSFF screening will be the NEW JERSEY PREMIERE! You definitely don’t want to miss this one!

“The Last Visit” – a Manmade Productions film, directed by Mark Clauburg and starring Alexis Lariviere and Dan Berkey. I play a supporting role in this film, along with my friend (and Monmouth County based Jersey Girl Ashley Licata)! This heartbreakingly sweet film has also racked up a ton of awards so far, and I’m looking forward to having it be a part of GSFF! 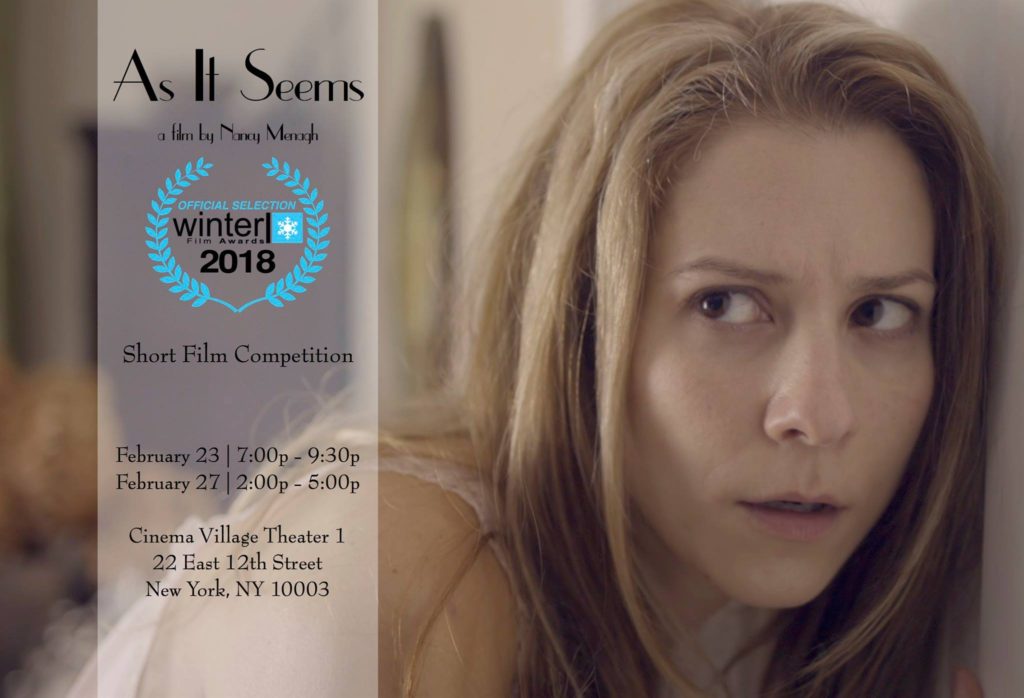 “As It Seems” – A Film by Nancy Menagh is heading back to New York! We are very excited to announce that we will be in the Short Film Competition at the Winter Film Awards in February. We’re set to kick off the festival with a screening on the first evening, but don’t worry if you miss us because we will also have a Women In Film screening midway through the festival!

Tips From A Mom Who's Been There

Tips From A Mom Who's Been There

More Scary Mommy fun – this time doing an ad for Walmart!  So thankful to Artistic Director Nick Fabiano for once again inviting me to play!  This spot was a fast-talking, constantly moving dance with the camera and the challenge was exciting!  I loved working with our director Ben Stumpf, my co-star Michael Cruz Kayne, and the entire Scary Mommy team!  Check it out HERE! 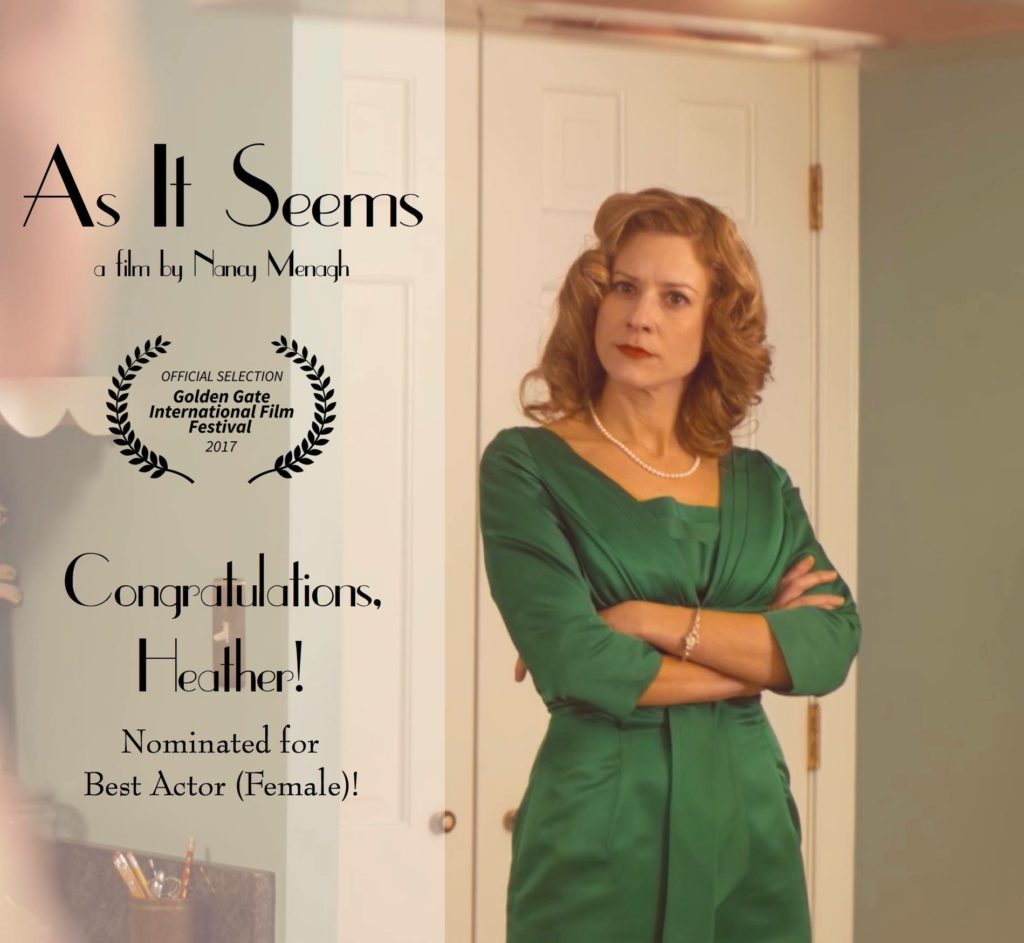 Holy Cow!!!  In addition to our “Best Short Film” nomination, I’ve been nominated for “Best Actor (Female)” at the Golden Gate International Film Festival for my work in “As It Seems“.  The role of Annette was my favorite, most challenging role to date.  It feels so good to be recognized in this way – Many thanks to my director, Nancy Menagh, to our awesome cast and crew, and to Net Effect Media and the Golden Gate International Film Festival!  I’m a happy girl!

“As It Seems” screens this Saturday, October 29th, 4:10 PM at AMC Theaters Cupertino.

Halloween: What You Hope For vs. What It Is

I am so pleased to share my third spot for Scary Mommy & Welch’s Fruit Snacks!  I loved reuniting with my scary kids from our last video as well as Director Nick Fabiano and his fantastic crew!  Check it out and have a giggle!

Another BEST SHORT FILM Nomination for “As It Seems”! 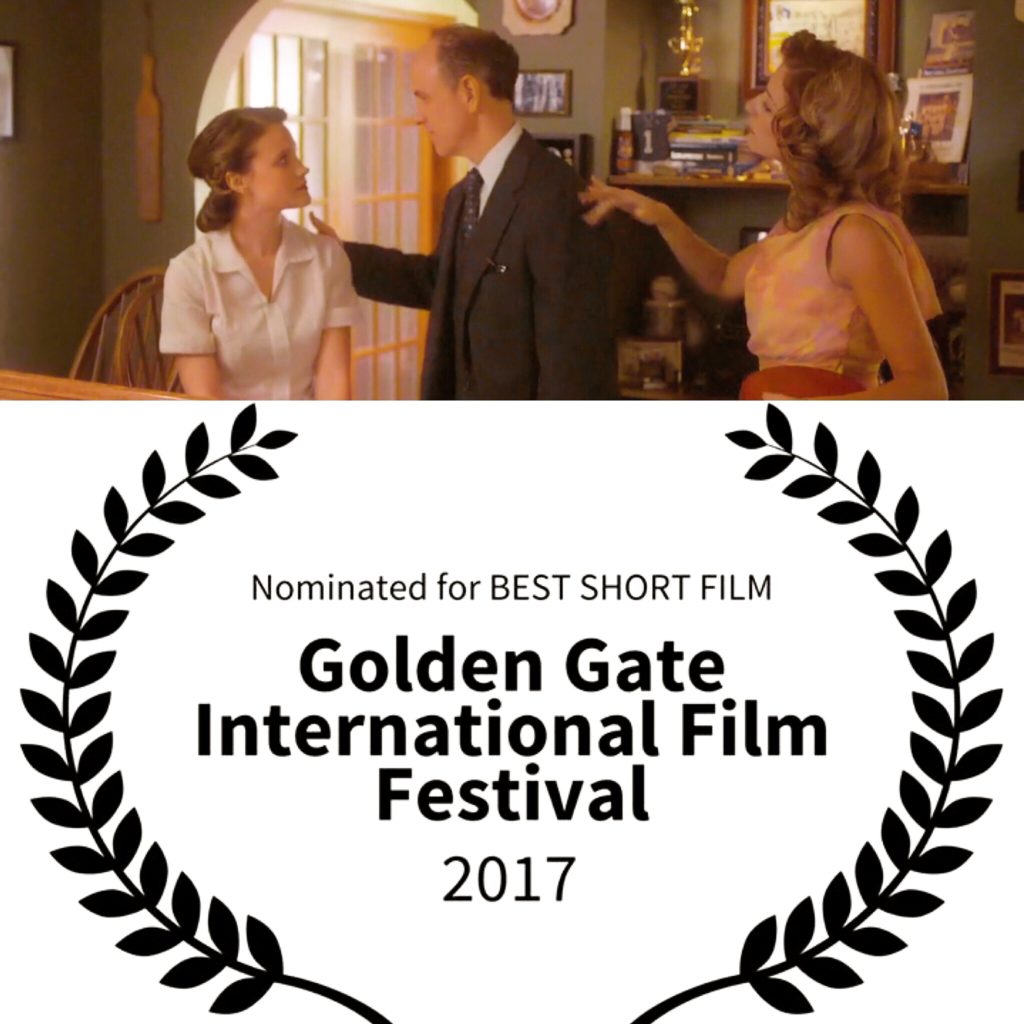 I am thrilled that “As It Seems” will have its west coast premiere in just a few weeks at the Golden Gate International Film Festival – and I am truly honored that we are nominated for BEST SHORT FILM!!!  The festival will take place in Cupertino, CA on October 28th & 29th. We will be posting our screening information soon so please stay tuned… In the meantime, visit www.goldengateinternationalfilmfestival.com for more information about the festival and tickets!

I am so excited to have TWO beautiful films screening this Saturday at the Golden Door Film Festival!  This will be such a fun afternoon of independent film!  I’m so proud of both of these projects and lucked out with these screenings being scheduled back to back!  Please come by, say hi and support the arts! 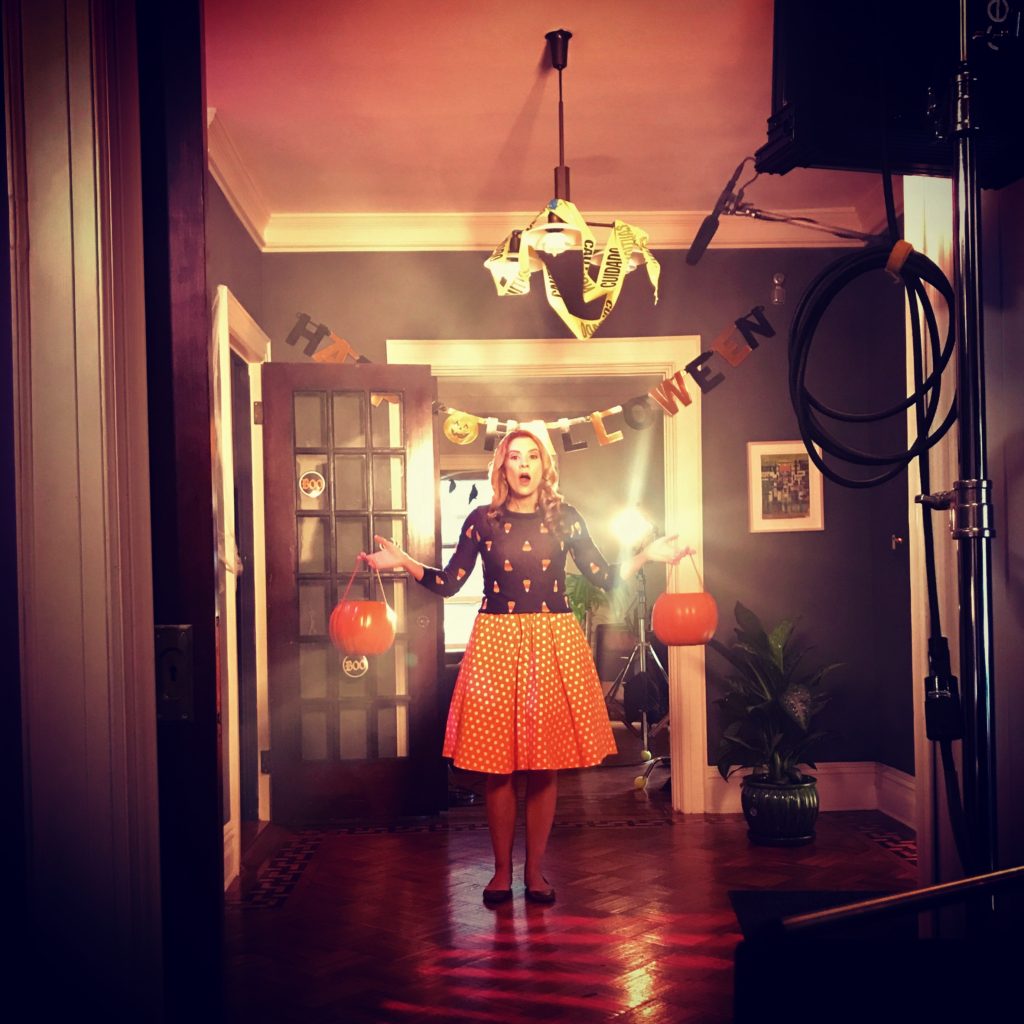 On Set for a Halloween Scary Mommy shoot!

I had a blast working with Nick Fabiano and the Scary Mommy team again!  This was my third Scary Mommy shoot – and this was a special Halloween edition spot!  I reunited with my Scary kids from our last shoot, and loved solidifying that “family” with another hilarious piece!  This is sure to be another viral video – our last had over 3.7 Million views! 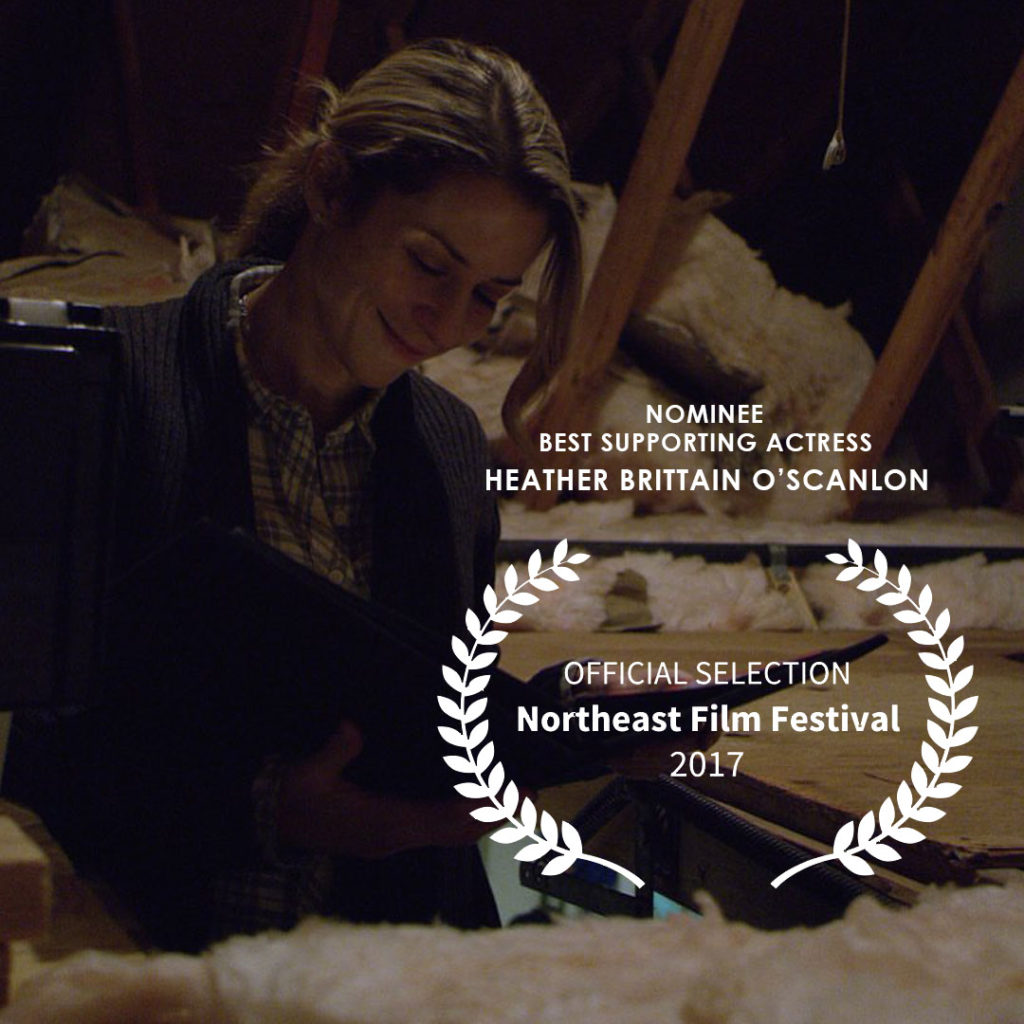 THANK YOU Northeast Film Festival for nominating me for Best Supporting Actress in a Short Film for Manmade Productions “The Last Visit“! Congratulations also to our leading man Dan Berkey on his nomination for Best Actor in a short film!

“The Last Visit” will screen during the 12:00 pm block at the Northeast Film Festival at Teaneck Cinemas on September 10th!

I needed some good news!!! Proud of this film #VictimNo6, thrilled to have worked with @nancymenagh & @russrusso and honored to have performed so well at with this #oscar qualifying fest! #filmfestival #womeninfilm #shortfilm #shortfilms #filmmaking #filmmaker #supportindiefilm twitter.com/SOSPFilms/stat…

@quincysaadeh Oh yayyy I’m so glad you will be working together!!!